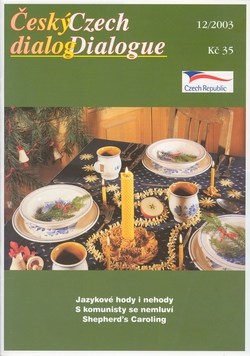 The introductory issue of Czech Dialogue came out on the thirteenth of December 1990. It was necessary to pick up the bundles of new magazines at the printer's and take some of them to the Czech Radio headquarters. I woke up that morning, but did not get up. I was hit with some kind of terrible flu and thus I was completely helpless. I begged my husband for help, but he laughed at me saying that since it was my ridiculous idea to make contact with Czechs living abroad, then I should be the one to carry the responsibility. However, after a while he did take mercy upon me and came to my aid.

A thousand issues of the magazine were sent out into the world in most part to the USA, in previously prepared envelopes, from the Czech Radio headquarters, to members of the Association for Science and Art. On the back cover page there was a full-page advertisement for broadcasting abroad. It was a type of barter that I had arranged with Frantisek Novotny who was in charge of radio advertising at the time. He was such a nice man who understood the importance of my venture. Unfortunately, his boss had other ideas and as a result, poor Frantisek got fired.

To send out the rest of the issues, I took out and used all of my savings.

That issue was supposed to be distributed by the Prague Newspaper Service. As far as I'm concerned it is a criminal organization, right after the Communist Party. I had a valid contract, which unfortunately was not exactly advantageous for me, but at that time a huge concern still had the power to dictate. I had to deliver ten thousand issues to a place outside of Prague and leave them there on a certain day, at a certain hour. I arrived a little late so they made me load the bundles, which I had already unloaded onto a ramp in a huge hall, back into the car, take them back home and request in writing another date to deposit the magazines. I must admit that while doing all that, I cried. I really felt like driving up to the river and throwing the whole load into it. As a result of all that hard work, my whole body ached for weeks.

The final shock came when they sold only 1,500 issues of the 10,000 they had requested. What a waste of money, paper and energy!

We got the first subscribers from abroad. There were 72 subscriptions, which meant that there were at least 72 people out there who wanted to read the magazine and subscribe to it. In the first issue I was fortunate to have an interview with Petr Pithart who was then the Prime Minister. He sincerely believed that a dialogue with Czechs abroad was a great idea.

People started sending in their opinions and new articles. As their interest grew, so did the number of readers. Slowly but surely I tried, with much help from good friends, to improve the graphic part as well as the contents of that modest publication.

People acquainted with the magazine, who had come from abroad to visit Prague came to visit me and broadened my horizons. They told me how it really was after they had left their native land.

But, I'm talking about things that happened so long ago!

What was even better

In time, this poor little black and white publication became an interesting magazine. The Ministry of Foreign Affairs offered collaboration by regularly buying over 3,000 issues which were sent all over the world to different Czech embassies and organizations.

However, the persons in public office changed and those who came after them had different opinions.

In the year 2000 we were told that our editorials were rude and that the ministry would publish its own magazine. By that time, the Czech Dialogue had already made a pretty good reputation for itself and had many regular readers so the financial difficulties that followed did not mean the end. It gained support from a prestigious Czech-American organization, the American Fund for Czechoslovak Relief, as well as from many readers at home and abroad.

But as people in public office changed, it again began getting support from the Ministry of Foreign Affairs. This year we even got a financial donation from the Senate. The Czech Dialogue is also distributed throughout the world through Czech Centers, which gives us a chance to acquire paid advertising. This year in March we had received the Medal of Jan Masaryk, given to those, who have worked for development of our country within the European family and for the bequest of T.G. Masaryk and Jan Masaryk, as well as, for holding in respect Czech history. Needless to say, it made us very happy and the Czech Dialogue gained more of a good name.

During the past thirteen years, the Czech Dialogue passed through dramatic changes, bad times and periods of success.

I had the opportunity to visit a large number of our people in the USA, Canada, Australia and most countries in Europe.

We could say that the Czech Dialogue is known throughout most of the world.

It seems symbolic that just a few days before our anniversary celebration on December 13, 2003 I am here on board a plane that's transporting us between different countries in South America, writing this editorial. I am here with the Senate Delegation, which besides their official duties meet and try to get closer acquainted with people of Czech and Slovak origin. Believe me, those meetings are beautiful and touching, but most importantly, meaningful.

At the end of this unusually long, annual editorial, I would like to thank the Chairman of the Senate Mr. Petr Pithart for the opportunity to be here in South America and for his interview, which will come out in the next issue. Also many thanks to Martina Fialkova who took over my duties after I left and who worked hard all year long to make the magazine prosper. I also want to thank all the authors, colleagues, sponsors, advertisers, and all those kind, understanding people who let us know in many different ways that the idea of a dialogue with us HERE, and with them THERE, is necessary and meaningful.