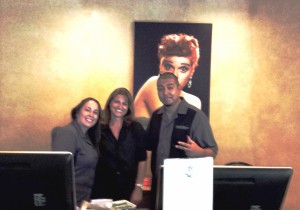 I have been traveling my whole life and the last twenty years intensively. I have stayed in camps, Bed & Breakfasts, Inns, Motels, Hotels, and Resorts of all kinds. Some were small and some were large. Some were lousy and some were excellent.

Some barely made it to one star and some had five! I spent in hotels summers, winters, springs and falls… and once, when our plane from Boston to Denver got caught in a blizzard, even Christmas Eve. Other hotels (Moskva in Zlin CR, The New England Center Hotel in Durham NH or Hilton in Prague CR) became our only homes for a while, and in other hotels we became regulars (Monte Carlo in Las Vegas).

When we moved to New Hampshire we were far from both sets of grandparents, far from any family members, and from the beginning, even far from all of our friends. We had no place to go to unwind and relax. When your family lives close you can just drop by for Sunday lunch or Friday coffee, let the kids play with grandma’s dog, or let them make a mess in her basement and have a little break from it all. Which is well needed on any occasion, but especially when your children are little and you are up and running with them around the clock. Well, we didn’t have any of that. But we had something else. We traveled with Bruce to all of the conferences, presentations, and seminars. While he was working the kids and I were taking advantage of the places that we stayed. Therefore, hotels became something special to us. They became our place for rejuvenating, just like a “visit to nice relatives”. They became not only oases, but also safe havens.

One winter the power went off in our town, Durham, NH, for several days. It was after a severe storm and half of the state was without power. Rescue crews from other states came to help fix it. The house was freezing, the water wasn’t running, and the candles were burning fast. Nobody knew how long it would take to fix the broken power lines. The darkness was setting in and I started picturing another night in a freezing home, without warm food for the children. Some of our neighbors packed their cars and headed to the next county to stay with their relatives. I packed the car and headed to the next town to stay in a newly opened Motel 6. Bruce decided to stay behind and watch the house in case the power came back on. He actually stayed at his university close by, where the buildings were kept running on generators.
I walked in to the motel with two sleepy and hungry kids. At the reception a young man was working. The hotel was totally empty. I believe we were the only guests that night. He looked at us pitifully and asked how he may help. He set up a nice, warm room for us, helped me heat up the milk bottle and brought bubble bath for the kids, which normally Motel 6 does not provide. We were in heaven! After this episode I saw hotels (and especially its workers) in a different light.
No wonder our children fell in love with traveling and especially hotels. They became experts on writing reviews and checking the quality within their first steps upon entering.

As a writer of travelogues I often mention the places we stay, or the people we meet there. I write reviews for Travelocity and Hotwire and have been studying the travel and hospitality industry for years. By now I can honestly say I spent a lot of time in hotels and have seen it all. But what is the secret of hotels? Why are some better than others? Why some are bankrupt and others are thriving? Why in some hotels do we feel like outcasts and in some we want to stay forever? Is it the ranking, the brand name, or is it something else?
To find out, you have to know both sides. I never worked at a hotel myself. I knew it from the guest’s side only. It was about time to do something about it.
We have a friend who owns a hotel. I know the place; I stayed there a couple of times with the family, and on occasion even with Bruce’s class. It is a wonderful place, in a great location; always clean and friendly, open for many years. They must be doing something right, I thought.
So, I asked our friend a huge favor. Would they let me work at his Hotel & Resort? I was more than excited when he said yes! How kind of him! I am not sure if I would be so brave and take on some “Orange County Housewife” to let her do her little experiment in my place? I will be forever grateful for their trust!
For almost two weeks I worked the morning, afternoon, and late night shifts. I watched the receptionists answer hundreds of phone calls, make hundreds of bookings, check-ins and check-outs. They also had to solve all of the problems that came their way. I worked with the housekeeping crew, hotel accountants, marketing department, and management. I watched the maintenance guys fix broken toilets and much more! I watched the hotel chef cook and bake his tasty food, and went to shop with him for groceries. I stayed until the hotel bar closed and admired the barman who hears many “interesting” stories every night. I saw the doormen take care of hundreds of cars. And because this Hotel & Resort has also nightly live entertainment, I watched all the musicians, singers, and artists, every night!
I admit I could not keep up with any of the workers. It would take me much longer than two weeks to get their speed and experience. I admire them all! They worked hard and well. They were upset when they could not satisfy impossible guests. They were happy when guests came to praise them for a good job. They were all very patient with me and extremely kind. It brings tears to my eyes every time I remember it. In other words they care about each other and they care about the guests.

My new colleague Alex, who works at the reception, asked me a good question during one of our shifts: “What makes some hotels better than others?” It was the very same question I was asking myself for years. But only now I could answer it: “It is the people, Alex,” I replied. It is not the stars, not the brands, often not even the location… it is the people.”
It starts at the top with the boss and rolls down like a snowball throughout the whole place. If the people are knowledgeable, with good work ethic, they will like what they do. They take pride in what they do, too. When they are knowledgeable they are confident, and if they are confident, they are professional. But most important is to be able to add to all those qualities our humanity - our empathy for others. Empathy makes us understand the needs of others. And understanding the needs of others makes us flexible. Flexibility is critical in business.
The young man in the Motel 6 during the snowstorm did not have to help me with the milk bottle or bring bubble bath, but he did. And the same goes for the people I worked with the last two weeks. They did not have to be so nice, kind, and patient with me or others, but they were. They had empathy and respect for others. Humanity is what makes the place so special!
In paradox, we tend to think that success comes to those who are heartless. The opposite is the truth. Humanity is what makes us stronger. Caring makes us better. And that applies in private life as much as in hospitality or any other honest business. You care and you win, because good people will want to work for you. And guests will want to come back to you.
And that’s the whole secret. KD (2013)