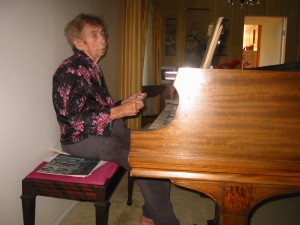 Last night I could not sleep - I thought it was the jetlag - from the trip by plane against time, but a friend of mine said that the full moon was to blame. Be it as it may - I had an idea which has to be put “on paper” before it disappears in a deluge of other ideas. This happens often.

Those of you who read Czech Dialogue or who read books which I had published about Texas and about The Great Plains know that:

The translator of Czech articles into English is Mrs Marie Dolanska who has lived for many years in San Diego, California. I was honored to be present at her birthday party- she was 93 years old on November 1, but the celebration was on November 2, because Friday was “Halloween”- All Souls Day in the USA. Children go from house to house dressed in various costumes to obtain sweets. Her nice neighbors came, also her daughter Vera and son Jan. We drank sparkling cider and enjoyed the famous apple pie from an old town called Julian. I was present when Vera bought the pie. She took me on a wonderful trip the previous day- we went to the desert.

Marie was sick for about six months and it looked very serious - but she got suddenly better a few days before my arrival. And she is translating again. And of course she is working for free!

Marie and I know a lot about those Czechs who do not like to spend any money for anything- they are called “cipaci”- or “cheepies” in Czechenglish. They are not readers of the Czech Dialogue, neither do they buy my books, even if their names are mentioned in them. For example - one older lady whose picture appeared in one of my books said: ” Rather than a book - I will buy an older sweater in an “opshop”, which is a second-hand store in Australia. That is her choice. Her children and grandchildren would probably appreciate this more than to read about her in a book!

But back to the story. Marie introduced me to the group at my presentation in the Czech House on November 3. She was rewarded by an applause because she spoke wisely and to the point. Thereafter several people came forward and wanted to meet me during the next few days. But that is another story…