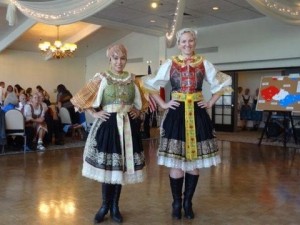 The confusion before the elections was frightening. I was glad that I did not have to vote because I was planning to travel out of the country. A lot of people voted for TOP 09 because it seemed the lesser evil. Nobody was surprised that ODS  fell quite far below the others, then there were the socialists and the party ANO.. That promises lots of interesting happenings in the House . It is good that certain “cabaret” groupings did not make it into the Parliament, but still whatever  will be, will be… I do not feel competent to predict anything- I am not there and I do not follow everything.

While the votes were counted, when the voting reached its peak, I was  traveling from San Francisco to Los Angeles. The desert was all around me, some amber orchards, vineyards  and finally canyons where they make Western movies.

While sitting in a big car I had a chance to talk to other travelers - the Jancariks, and Jara Dusatko, but more about them later. We were traveling with our journal’s representative Zelmira Zivny and her husband Milos. They had prepared for me an entertainment and work program in San Francisco and for its surroundings. It was beautiful and very educational. And also very tasty when I think of Zelka’s fig cake or her vegetable salad with figs and grapefruit. Wherever I stay abroad I cook goulash or potato pancakes. Here I was not allowed to cook anything - Zelmira is an excellent cook - at most I was allowed to set the table.

We finally arrived at our destination. First there was the meeting of Sokol representatives of California,.. The next day there was a great Sokol celebration to commemorate 95 years of Czechoslovakia’s founding. Lots of people came - about 200 people. The meeting was opened by consul general Michal Sedlacek. He spoke well, to the point, he did not have to use the usual patriotic phrases.  The local Czechs told me that he had a very good working and friendly relationship with them. He expressed appreciation of the fact that the San Francisko Sokol  organization supports the Czech school- there is hope to rejuvenate the Sokol. It was obvious- he expressed the hope of an Sokol who is getting old… The ladies who head the Czech school are very active, they work with enthusiasm and sacrifice a lot for their work and for the cooperation.

Yvonne Masopust prepared an unusually interesting show of Czech, Moravian, Silesian and Slovak national costumes. And she taught a group of the Sokols how to do the czardas.

The Sokol President Lillian Roter was very kind and allowed me to present to this enthusiastic audience my journal Czech Dialogue, the Czech Calendar and my other books. Unfortunately I did not get a chance to stop downtown in the library of Jirina Fuchsova. I have known her for many years…but there was not to way to visit her because of time and transportation limitations… I had to be in San Diego the same evening and it took 4 hours by train to get there - and to reach my final destination -  the house of our enthusiastic volunteer translator of my books Marie Dolansky. I am going to celebrate her 93rd birthday and then we are going to the House of Czech and Slovak Republics (See older texts of the Czech Dialogue), where I will have another presentation and where we shall also welcome the writer Katka Dehning.

At Marie’s I will also cook some potato soup with mushrooms Those I managed to sneak in packed in a flower bag and hidden in underwear.

And then I shall ask her to translate this Editorial from Czech. She was ill for some time and now she is well again and wants to do something. So wish her luck.