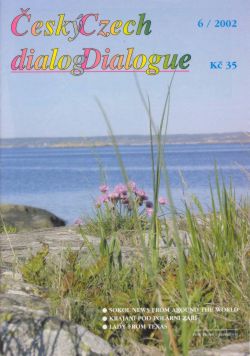 Yesterday was Sunday and I went to mass. It was totally different than any mass I have experienced. The ceremony started with a choir singing Czech songs such as Kde domov muj, Ta nase pisnicka ceska, Chaloupky pod horami.
Almost one thousand people of various ages, from babies to grandparents, were singing together with the choir. The event took place at the Knights Columbus Hall in city of Ennis, Texas.
Very interesting and humorous for me was the following sight: the altar for the mass was set up in front of the stage on which the choir was singing; above both of them was banner proclaiming Budweiser, the king of beer, as the sponsor of the event.
Father Caldwell the celebrant for the mass, appears on the scene and greeted the people with her speech about God, love, people, their problems, the joy, and everyday life.
He himself was tested in life. Before he become a priest Father Fred was married and had a family. His wife died and he was left with responsibility of raising of children. His children were present at the mass and father Fred proudly presented them to the audience. His speech was most inspirational. Other songs followed, polkas, waltzes, hymns now in English language. The first song had the refrain:
So let the Son shine in
Shake hands with your neighbor
And happiness will never leave your heart.
All the people shook hands enthusiasticly with another, sometimes they exchanged hugs.
The other following song Brother and Sisters Polka was very apparant because the mass was a part of a happening called National Polka Festival. It is annual event at Ennis.
Father Fred questionaled his flosk as if they were pupils at school about from were they come. The people applauded as they heard from how far some had came. The loudest applaus happened when my friends announced that there was a visitor present from the Czech Republic. I stood up and thanked the audience. After the mass people came up to me to express welcome friendship, many asked about life in CR, Prague, Brno, and Slovakia. They told about their ancestor from CR, mostly Moravia.
Even though I was a stranger for them and they knew nothing about my person or character, they accepted me as a sister of their a big Czech and Slovak American community.
I am here only three days and I already have a rich experience and ideas. I will happily write about them in next issues. Now I want to make some observations without making any judgements.
People who left the CR under nazis and communist times consider themselves exiles, they are apart from the people who originally emigrated many years ago - "krajane".
I am considering the differences between these two groups of people living abroad.
I discovered for example:
While there are 60 thousand people of Czech origin living in the state of New York which over the years did not maintanded The National Hall {one of the best beautiful house in Mannhattan} and recently they rid themselves of the house by selling it to the Czech Republic for one dollar {they promised to repair the building}, in the town of Ennis, which has about 20 thousand inhabitans {various origin}the Texas Czechs people have built 4 big halls, a beautiful catholic church and school. And with their own hands and monay. All these buildings are properly maintanded and used by many visitors from close and far. I have seen it.
.While the exiles still feel the loss of their homes and positions and have sense of being torn from their roots, original emigres {krajane} no longer have this feeling. They are Americans. Their longing for things from the old country are only taught in heritage from parents and grandparents. They are proud and happy for their Czech origin.
As I said, these are not judgements, but only impressions from my first days in Texas.