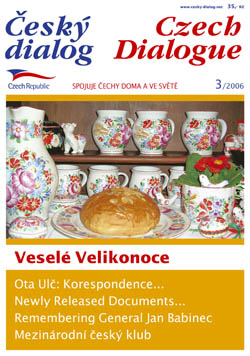 It is a unique orchestra and its performances are most impressive.. It was founded 20 years ago by Stanislav Stepan, a teacher at a Basic Art School in Prague 8. Many young people took part in this ensemble over the years. Today it consists of about 20 players (pupils, teachers, university students, etc.) In addition to accordions, the orchestra has five keyboards, one percussion ensemble, one flute, saxophone, clarinet and kettle-drums.

I was fascinated by their performance of Bach's Concert in C for Organ and Joplin 's The Entertainer, Bohumil Blaha's Accordion Boogie, G.Gershwin's Rhapsody in Blue, G. Rossini's Tarantella, A. Chacaturjana 's Saber Dance, and maybe even more by their performance of Dvorak's Slavonic Dances and Smetana's Moldau. The members of this marvelous group are mostly young( in body or mind) and thus one can appreciate their enthusiasm to play -their work is their hobby.

After 1989 they were finally able to travel to other countries. Right away they received two prizes from festivals in Italy and they like to return to this country. In addition to performances they like to meet also for other common activities, like field trips, etc. In short, they understand each other in music and beyond . You may hear their concert for example on April 22, 2006 at the occasion of the IV. European Festival of Accordion Orchestras at the Narodni Dum in Vinohrady, Prague2, Namesti Miru 9, or on March 29. and 30. 2006 at a common concert with a Russian Accordion Orchestra in the Betlemska Chapel, or at the Narodni dum in Vinohrady.