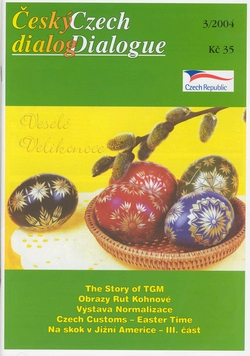 We all met at the train station. Our group consisted of members of the International Czech Club, President Vaclav Klaus with his wife Livia and other people planning to visit the Museum and cemetery in Lany. With nostalgia, I remembered the time seven years ago when our club found a pleasant haven on the second floor of the station building.

Old Lady Locomotive, blue in color with the name of Albatros pulled in addition to the regular coaches a posh salon car, built for President Masaryk for the occasion of his 80th birthday.

However, not even that fancy car was saved from black soot, being blown out of the chimney. Nevertheless, the trip was very pleasant. We got off at Stachov and along with the presidential couple, went on to Lany. President Klaus placed 2 beautiful wreaths upon the grave of President Masaryk. He gave a nice short speech in which he expressed his respect and admiration for this great political personage, stating that he was not only the founder of the new democratic state of Czechoslovakia, but a Czech statesman that has no equal. Prime Minister Vladimir Spidla who arrived in a limousine spoke along the same line.

We hurried to the Museum of T. G. Masaryk where we put finishing touches onto our exposition. The opening took place at one in the afternoon and all went well. We have 12 panels there, and a glass case. It’s worth a stop if you’re driving through the area.

And now, why are we there? Because the Czech Dialogue is the only magazine, which corresponds back and forth with our people abroad who on account of their belief in Masaryk ideals were forced to live abroad. Because Masaryk ideals and thoughts are the core of the contents of our magazine. Because we write about TGM and his family in practically every other issue of the magazine. We had agreed upon with the administration of the museum that we are interested in upholding Masaryk ideals as well as in being in contact with Czechs all over the world who are on the same wave length. We write to people all over the world about Czech culture, history, about those who had left and managed to do well abroad, as well as about those who stayed, battled with life, bringing forth positive results. Neither THEY THERE, nor WE HERE had it easy and that’s what it’s all about – an exchange of experience, opinions, or the possibility of personal meetings, for example through the International Czech Club and our magazine. We feel honored that the Museum of TGM gave us the opportunity to hold our exposition.