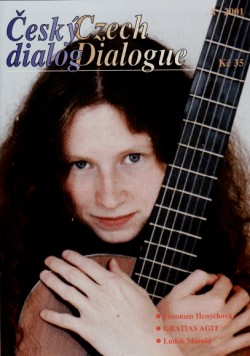 The Acceptance speech of Mr. R. Molineaux, a 2001 recipient of the Prize

"Your Excellency, Ladies and Gentlemen:
I am well aware of the great honor bestowed upon others and me today by the representatives of the Czech Republic. I also very much appreciate the friendly and kind welcome and hospitality that our spouses and we have received. For all of that- I like to express my sincerest thanks. I became interested and involved in Czechoslovak affaires purely by chance. One of my uncles had a picture from his young years, which showed a group of boy scouts. He visited Czechoslovakia before W.W.II and that picture was a souvenir of his visit. That picture sparked my interest in your country. My interest grew even stronger later when I came across the infamous speech of Neville Chamberlain in which he described Czechoslovakia as a remote country of which we knew very little and therefore (as he had probably thought), we did not have to worry about it at all. Even though I was only 12 years old at the time, I considered his statement a pretty poor evasion.
Later, in 1969, as a student leader of the National Student Association I met Your Excellency. (Jan Kavan, the minister of Forign Affairs ). I remember a dark-haired, serious young man with a full beard. At that time you were trying to get support from the National Student Association to help the Czechs and Slovaks to rid themselves of Soviet occupation. I was convinced that my country would decide to help the Czechs since she had been indebted to them. As France had emained inactive. I decided do something.myself.
That was the beginning of my involvement in supporting the democratic opposition in Czechoslovakia for the next 20 years.
For 20 years and then for another 10, I met many Czech people and became more and more fond of them, learned to love your culture, your society and especially your beer. ( I might add that Czechoslovakia was the only country that threw me out in 1970; I used to get thrown out of pubs and such, but to be kicked out of a country was an exception.) I would like to express my gratitude which this pleasant ocasion privided for me and my wife.
A great opportunity to visit your free country and to express my respect for Jan Masaryk, who probably was one of the greatest politicians that Europe had lost. Because right here, in the heart of Europe, we all can celebrate a slow rise of a new, different and pulsating Europe. And our gratitude belongs also to you, Your Excellency- not only for the prizes that we all received, but also for your personal involvement and devotion to your people in the struggle to regain freedom. When we had first met, freedom of your country seemed to be a crazy dream- yet it became a reality which makes us all very, very happy. Thank you.