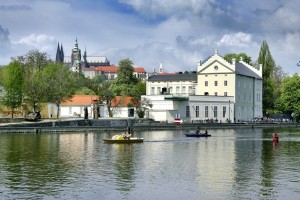 Writing is hard. However common or simple they may seem, something about the things or people we choose to write about should be at least a bit extraordinary in some aspects.

In today’s world governed by multimedia, sometimes everything and everybody seems to beso very interconnected, mixed together, post-structuralized, post-modernized, simple and funny at the same time, the meaning of things hidden to some and obvious to the other, with lots of unavoidable misunderstanding as a side effect everywhere.

Why can’t we just keep it all very simple?

Because we have this need to construct and create and thus impress, too,no matter what.

What would absolute liberation from this urge for creation bring us?

Ease for some, unhappiness for many. Because in spite of all the discrepancies, creation based on tradition also makes us human.

Prague, one of the most and best preserved historical places in the world, where I am lucky to be writing this from, is a perfect place to reaffirm and reconstruct one’s Slavic humanity, let alone creative cosmopolitan identity.

I fell in love with Prague immediately, the first time I saw it. Pure love at first sight. I could spend hours sitting on the Charles Bridge on any day, walking on Mala Strana, watching all the remarkable legends and history presenting themselves in front of me, becoming one with the city, breath by breath, and at the same time letting all the excess eagerness and yearning to easily and readily flow away with the vigorous sound of Vltava.

Randomly, images of ordinary people in everyday situations come to my mind. Destruction.A frustrated worker hammeringdown Donald Trump’s star in Hollywood.Creation. A  Yoko Ono’s impersonator at the Lennon wall in Praguereadily poses for a photo without any charge. Tradition. At a family store, the Vietnamese father observes his teenage daughter at the cash register as she gives me back exact change. Travelers, emigrants, explorers, creators, destructors, energizers.Common people, but extraordinary contemporaries.Initiators of change.

There are quite visible traits that people are similar everywhere, regardless of how many “degrees of separation” we have determined so far, and that opposing concepts and multiculturality can coexist, starting from my home town Rijeka in Croatia, where there is evidence of different generational reaction to the Homeland War, one, for instance, started by members of a rock band called Fit, making it into some kind of cultural emigration revolution. This band, together with a group of other young artists, moved to Amsterdam during the 1990s to show their rejection of destruction, negativity, warmongering, poetics of war, call it what you like. It was one of the most popular generational rock bands in ex-Yugoslavia, with its complete story detailed in a documentary. At the same time, members of the same generation from the same city and from the other parts of the country did go to war, some of them sacrificing their lives at a very young age(Pavo Urban’s War Diary), but in spite of its inevitability and its very tragic consequences and destinies, as a generation they managed to convey a similar message -  the spirit of freedom.

Kindling this spirit brought me to Prague, where tolerance has been nurtured carefully for centuries, and where, among many other fascinating things, it is also possible to, for instance, overhear a progressive discussion about the news of the very first female Arab priest while leisurely strolling towards the old Jewish cemetery.

It kind of feels like riding on a fascinating line with the final stop called Strawberry Fields.