Happy to be Sister City 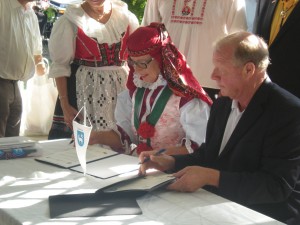 Happy to be Sister City

Our membership has been busy this summer involved with several big activities.  In March we had the installation of new officers President Daniel Moravec, 1st Vice President Jana M. Riley, 2nd Vice President Carol Moravec, Secretary Pat Blackshear, Treasurer Richard Skopik, Foreign Affairs officer Lillian Filer, Historian Evelyn Skopik, Directors: Mildred Bajer, Mildred Dokupil, Joe and Alice Janecka, Matt Filer and John Blaha. For our March meeting John Blaha presented a program on the “Last Flight of American Bomber #118” which is a book translated from Czech about how the Czechs assisted US pilots and flight crews during World War Two. Our theme for our July meeting was World War One, the documentary film “Accidental Army” was shown and about the Czechoslovak Legionnairs who fought their way through Siberia back to their homeland.

On June 20th the History of West Museum opened in downtown West after four years of planning. The Museum Committee with the support of the community, the City of West, many individuals and the founding families of West and organizations including the  McLennan-Hill chapter made this possible. The community helped with renovations, fundraisers and donations of items to the museum. The building was built in  1896 in downtown West and is located  near the Village Bakery and Olde Czech Corner Antiques. The museum committee spent four years working to make this day a success, the following are members or citizens of West which helped on the board of directors: Georgia Hutyra, President; Joe Mashek, Vice President; Nancy Hykel, Secretary; Patricia Cloud, Treasurer; Lillian Filer, member; Daniel Moravec,member;Evelyn Skopik, member; Al Vanek, member; Nancy Vidrine, member.

The entry way area has a replica storefront with early businesses represented, the museum is divided into several rooms with each one having a theme from the early history of West: the early history and settlement of Bold Springs, the railroad, one of the prominent founders of West and its namesake Thomas West who was a rancher, businessman and banker. The original safe used to store their valuables and money is on display. After the railroad came and immigrants from the Czech lands and Germany changed the ethnic make up of the city which at one time had 18 groceries stores, movie theater and a confectioners shop. There are several rooms dedicated to the history of West: a covered wagon with examples of possessions a family would take with them, pictures of the early families of West, vintage photographs and cameras from the Urbanovsky Studio, a tribute to the first responders who were killed in the West explosion , a Veterans section honoring citizens who served their country, blacksmith shop another other displays.

The museum operating hours are Thursday, Friday, Saturday from 10 am-4pm  and  by appointment and admission is free.

The members of our chapter hosted dignitaries from the Czech Republic: Mayor of Kunovice Ivana Majickova and her husband Petr, Jan Mazuch and wife Magda, Monsignor Josef Nuzik for the Archbishop Olomouc. The Czech visitors toured Texas and saw Ft. Worth/Dallas, Austin, La Grange, the Texas Ranger museum in Waco as well as the aviation facilities at TSTC Waco along with a tour of downtown West and a homecoming football game. Mayor Majickova and Mayor Tommy Muska of West signed a sister city agreement during Westfest festivities. The high school students hosted by the city of Kunovice during their trip to the Czech Republic after the explosion attended the ceremony.

McLennan-Hill chapter members entered a float celebrating 40 years of Westfest with a birthday cake float and won first place. Our members manned the genealogy area in the Cultural Amphitheater and participated in the Parade of Costumes which had over 35 participants.

Future meetings are tentatively scheduled for October11 and December 13 at the West Community Center in West at 2 pm. We will have Christmas activities and traditions.