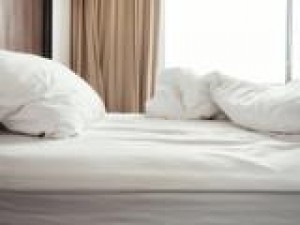 In the times of my mom, and grandma in middle of Europe , a girl could not get married if she didn’t have two big fat feather beds and also four European size pillows, they are quadratic, one side from  32 to 35 inches. We aren’t speaking about quilted feather beds, but about a huge fat full filled with fine feather duvets. This is the reason that the goose was a very favorite animal on every farm and also on courtyards even in the little towns. Especially in hard times during W.W.II, when food was rationed, geese saved lives from many people. Unlike the pigs or cows, you didn’t need to give the biggest part of the meat to the Germans.

After WW.II, when I was born, the situation with the food was not much better. Tradition of the fine feather duvet was still in place. This was the reason, why my grandma,  for making  a good dowry for us, always have geese (and by the way a goat, some chickens and rabbits). I learned by her everything what you need to know about what a beneficial animal goose is. Homemakers used every piece from this so useful bird: Meat for festive gorgeous Holy Martin feast or festive dinner, blood for special food, skin for cracklings (greaves) liver for French pate, inwards for healthy soup, fat for tasteful spread on bread and also for using on the breast for bronchitis, or pneumonia.  Also the bones were given in that time to cats and doggies. Nothing left, just the feathers for fine dawn beds.

You probably don’t remember but have seen pictures: how many immigrants came with these duvets over their backs or in trunk, if they left the boats here in Galveston or on Elis Island. Also this has been many times the big packages coming from Europe, still in 60s in last century. Rumor between immigrants was the American feathers are not fine and, not real down…

How to raise a good feather giver, big fat white goose? They live in spring is very idyllic and nice, yellow Gosling’s usually watch by a sweet little goose girl (husopaska). Just when they are white and big then their fate change. The biggest are prepared for church summer fest feast.

You bring them in one feeding stall, in the mow. Today it is probably considered animal abuse. Very similar like the geese in Chinese ceramic vases like mow, the wooden middle European mow is very little. Goose cannot almost move. And she gets feed up with special food. Hard cones made from pollard, some flour and some greens like nettle. You made them and dried them on the stove and fed them three times a day. Not just fed.  You push them with petting movement with your hand down they long neck. We kids liked to help with this procedure. Sometimes it took two people to really stuff the geese well.  They would grow and could move less. She would get fat, and have big fat liver for this French pate. It took sometimes two weeks or more, before goose was ready to be offered. I hated one of my neighbors, who cut the heads of chickens and let them run in agony before our childhood eyes. I was frightened of him. But I was never afraid of my grandma, who peacefully opened the neck of a goose. I was sometimes helping her stir the blood, that it is not to thick and you cannot use it. It was probably her calmness, peace and respect for live.

After the goose got damp with hot water and her feathers are plucked in one big sack. For a duvet you need at least 6 to 10 geese, for the pillows also probably four.  All summer long until the winter the sacks with the feathers from the geese would wait for the stripping time. The family, children, but also neighbors and friends come in the long winter nights together and strip the big feathers to very fine silky down needed for the dowry downs. This was a beautiful time in my childhood, sometimes just by oil lamp or candle light, to save electricity or during shortages.  The women would sing old romantic songs or tell life stories, some of them very scary. Our hands were working and our ears filled with memories of these beautiful stories, connecting us with past. Men usually sat by a ceramic stove. My grandpa sat with his big black tom cat, on his osteoporosis bowed neck, drinking beer or something harder, would tell stories too: About the wandering time, about wars and politics. This is how the feather beds come together. Not one winter night, more winters and nights are needed to make, just one, and if you have more daughters, even more nights.

When my grandmother (babicka) died and made just a the part of the matrimony, my mom (maminka)  followed her steps. She was great farmer, she just could not cut any goose neck, my godmother or our neighbor had to do it. But my mom’s feathers had been the best in town. She made the finest down beds for me and my sister and some for sale.

But the times changed. You no longer sleep in a room, where on the bed close to your mouth is hoarfrost. Bed rooms are heated and the sweating under the huge down bed is no longer the way to put down a fever.

If my sister came in the marring age, she let to be made from her hard gained beds couple European feather quilts. My mom was very upset. But a couple years later they made the same for me. You would probably not believe, but some of the beds found their way not only to Germany but later also here to the states, not to me, but to my kids: For David in hard winters in Buffalo in New York state and to my son in Alabama… The duvets in Galveston take a IKE. I hope about them they still  somewhere a live and  still have inside these songs and stories and made them good lullaby’s.