A Summer in Prague 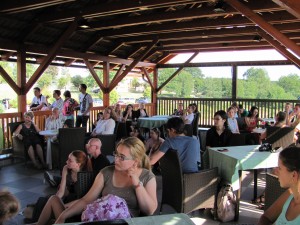 But why are you studying Czech? And what do you think of Prague?

These two questions have met us wherever we go. After all, we do look rather different, in a group of about fifty students from over twenty countries - most of them in their late teens or early twenties. Here we are, two Australians in our seventies, so the question is not surprising. What are we doing here?

The answer is complicated, so I'll simplify it. My partner has a Czech aeroplane, a Meta Sokol, made in 1960 but still flying well, and David has come to the Czech Republic many times to work on it. About ten years ago he began this very course that we are now doing, but had to return to Australia before completing it. This year is the fulfillment of his long-held ambition, to finish the course,

As for me - I'm a writer, and two of my novels have significant parts that involve

Prague or Czech people. The country fascinated me, and this was my chance to learn a bit more about it. However, I hadn't really intended to study the Czech language as well ....

morning course in Czech Language was undertaken, so here I am battling with words like poslouchejte and (my special favourite) zmrzlina. Worst of it is, I don't even like icecream! But the tutor for our small group of beginner level students is infinitely kind and patient, and the others in the group have become good friends, so the classes have been a delight, not a hardship. All the language class groups are very small, which makes for close contact and good learning.

So what exactly is this course in Czech Language and Culture? Now in its twelfth

year, the course is held in the Albertov Campus of Charles University, one of the

oldest and most prestigious in the world. It is organized by the Institute of Language and Preparatory Studies and held under the auspices of the Minister of Culture and the City of Prague.

And what a course it is! As someone in the group said: "This course deserves a

tourism award!" It's not only study;  it is also a rare insight into aspects of Czech

culture that the average visitor never sees. Organised by the brilliant director of the program, Marie Poláčková, the Czech Culture course has brought us into direct contact with musicians, like internationally-renowned cellist, Jiří Bárta, famous writers like Petra Hůlová, artists such as Jiří David, and even the creator of the beloved children's comic Čtyřlístek, Jaroslav Němeček. That actually was the contact that most impressed Czech friends whom we visited; they had been brought up, like most Czech children, as devoted fans of Čtyřlístek, and were most envious.

the Municipal Assembly and a puppet performance by Spejbl and Hurvínek. We have had weekly showings of recent Czech films at the Atlas Cinema and follow-up discussions with the film-makers, scriptwriters and actors. Weekends have taken us on wonderful trips to places like Lednice and Valtice, to Třebíč, boat trips on the Vltava, to Orlík Dam and Chateau and to Zvíkov Castle - and even a tour and casting - at a Moravian winery and at the famous Zvíkovské Podhradí brewery. Something for all tastes indeed! And a wonderful introduction to Czech history, with guided tours of all these places and the chance to gain an understanding of this rich and fascinating culture. Special thanks to all the interpreters who made sure we all could benefit from these tours.

Another opportunity has been the chance to become at home in Prague, and even, threatening as it was, to be sent off around the city with instructions to find particular buildings and gain specific pieces of information from strangers. This chance to speak to people has been built into the program with contacts set up for us. For my own group, a Saturday visit to the re-built town of Lidice, and its moving museum of war-time atrocities, was made very special by the hours we spent in talk with a 92 year old survivor of that terrible time in 1943 when Hitler eradicated her town. A time to reflect on all that this country has suffered under oppressive regimes.

For us, Australians from down under, it has been a rare opportunity to mix with such a diverse group of students, and the fact that they have made us feel so at home is a reflection of the warmth and care shown by all staff members and in particular, Marie Poláčková, the director and founder of this superb program. It's been interesting, at times, to be so much older than the others - for instance, the day when the attendant at the Jewish Museum in Třebíč tried to stop us entering with the rest of the goup, convinced that we must be gate-crashers trying to gain free entry! The tutors had to explain that we were, indeed, students!

The four weeks of the course have flown by, and when we attend Karolinum on the last day for the presentation of our certificates, and when we join in the singing of 'Gaudeamus Igitur', it will be with a very genuine sense of rejoicing that we have done this course, It's one that I would recommend wholeheartedly to anyone interested in the Czech Republic.

So what about the second question: what do you think of Prague?

Ah well, what can one say? For centuries travelers have sung the wonders of this city. Prague is Prague. That is all that needs to be said.