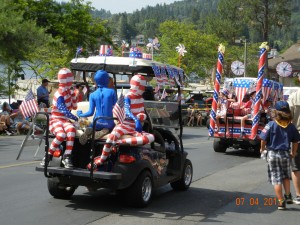 Happy 4th of July everyone! J  I have to tell you why I love to celebrate America’s Birthday so much.  I lived here for about 4 or 5 years when I attended a really fun 4th of July party.  It was not my first 4th of July party, but definitely the one that changed my life forever.  I was having a lot fun, eating all the good food, drinking all the good drinks, and talking to all the wonderful people.   I finally started to feel like at home.  All of sudden one of the guests approached me and annoyingly asked: “Why do YOU celebrate the 4th of July, you are not even an American.”

His comment left me speechless.  At first it made me very sad. Then it made me angry.   And then it made me think.  Really, why did I celebrate?  Maybe it was not enough to have an American husband, and American children, and love for the country.  Maybe I should really become a citizen?  Maybe I should really earn the right to celebrate the 4th of July? Thoughts flooded my mind.  You never want to make me think because then I get ideas.  And that’s how I came to the conclusion to apply for citizenship. “Don’t worry, it is easy, cheap, and it will take less than one year,” Bruce said, cheering me up when I told him that I decided to become an American.  Well, it was all but easy, or cheap, and it definitely did not take less than one year.  It took much longer than that!  I applied in the state of New Hampshire where we lived at the time.  It all started really nice.  I went for fingerprinting, got approved, and was waiting for a first interview.  But then 9/11 happened.  After that we all remember the anthrax scare and the D.C. shooter, and the nation’s thoughts shifted a different direction.  I can understand why the INS (Immigration and Naturalization Service) forgot about me.  One year went by and we were getting ready to move to California.  I notified the INS in New Hampshire about my move.  They told me to send all of my papers to the main office in D.C. and assured me that they will do the same.  The office in D.C. would transfer all of my information to the West Coast, Santa Ana office where I would belong from then on.  Santa Ana would finish the interview, since I already paid the fees and had my fingerprints done too. “It should be a piece of cake now,” said the lady on the phone.

We settled in California.  INS in Santa Ana indeed invited me in within a few weeks.  But only because I insisted and called them almost every day. Now one and half year had passed since I applied and I felt like I was entitled to move forward.  Finally they give me an appointment for fingerprinting.  We had to start all over with that because while all this was happening my original fingerprints expired!  To make a long story short, I went for several more appointments after that, because my papers never made it to California and my fingerprints kept expiring.  The INS building was like coming home:  the same officers, the same machines taking my identity, the same waiting room...   “Without your papers we cannot proceed to the final interview,” they told me over and over.  And nobody knew where my papers were.  Bruce offered for me to forget about the East Coast INS and start all over with a new application.  I did not like this idea for two reasons:  1. Things should work in the USA and I will not start my citizenship in a country where they lost my documents.  I felt they needed to find them.  2. The application fee cost twice as much as it did two years ago when I started the whole process.  It would make MY application three times that expensive.  That did not sound right either.  It was a matter of principle. It took many phone calls, many more visits to Santa Ana INS and one clever INS guy helping me.  And we finally found my papers!  They were hiding in one tiny office in Vermont!  Why?  Who knows? But we found them!  And it did not even take that long, only a year and half.  Just in time for when I was moving to Europe for 8 months.  Yes, you can probably guess by now.  After I came back my fingerprints expired again.  It did not matter.  They already knew me personally in Santa Ana and invited me for the final interview.  It was almost five years now since I applied.  The officer who interviewed me could not believe my citizenship story and decided not to send me for more fingerprinting.  Instead, we just called all of the sheriffs in all of the counties where I lived in the USA and asked them to send me a statement that I was never arrested.  All the sheriffs (3 of them) were wonderful and I had the statements within one week.  I passed the interview without any problems.  After all, I had 5 years to learn all of the American history, politics, and grammar.  As a matter of fact, I wrote a book on American history (the one that got published last year in Czech Republic).  I was ready, nothing could stop me now!  I was earning my citizenship.  In another month or so I was sitting in the Los Angeles Convention Center attending the two hours long Naturalization Ceremony!  It was me and another five thousands citizens-to-be.  And it was wonderful!  We were all sworn in with the best judge we could ever wish for.  Music was playing, the flag was rising, President Bush was talking via recorded video, the soldiers were saluting, the new citizens were crying, and the families outside were screaming with joy.  Then the officers tore apart our green cards and replaced them with a new “birth certificate”.  We were welcomed and we were finally home.

My daughter Michaela was so excited that she told everyone about my citizenship ceremony the next day at her school.  Her principal (dear Dr. Rafferty) made me hold the flag at the outside morning ceremony and Michaela recited the Pledge of Allegiance.  The teachers and children were singing a song “This land is your land, this land is my land…”  All the parents and students (thousands of them) cheered and clapped.  It was a very emotional moment.  The next  4th of July my neighbors let me carry the banner during our local parade.  They were very excited for me.   I can never express my feelings and what it meant for me.  Now I could celebrate and nobody could ask me WHY?