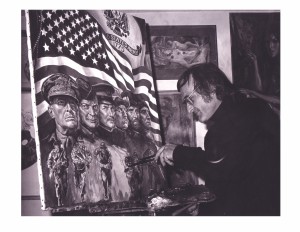 A native of Czechoslovakia, "Jerry" as they call him in Hollywood was born on May 26, 1926. Educated at the finest art institutes as painter and sculptor in Prague, he also acquired a wide range of knowledge and techniques in Rome, Munich and Florence which later served him become an in demand artist in the film industry because of his versatility and style.

Just after the Second World War, Jerry escaped the country following the 1949

Communist Coup, crossing the border into Bavaria on skis under the cover of

darkness. From Occupied Germany, he moved to Bogota, Colombia, where

He came to the U.S. in the 1950's, initially creating album covers for Capitol Records artists Nat King Cole, Peggy Lee, Joan Baez and a host of others.

He began his career in the motion picture industry in FOX and MGM Studios.

In 1956, he painted the replica of the Sistine Chapel for the movie "SHOES OF THE FISHERMAN." He then worked on other classics such as "MY FAIR LADY," "CAMELOT," "THE SOUND OF MUSIC," and "SAND PEBBLES."

Probably the most identified series of Jerry's works were for his friend Rod Serling's "The Night Gallery". The haunting ominous paintings on its pilot episode were the most talked about and unique hallmarks of any series

Jerry's title-art work earned him credits for the Oscar winning Best Picture film in 1973 "THE STING," starring Paul Newman and Robert Redford. He would later receive numerous praises for his works in the films "DUNE," "XANADU,"

Aside from Jerry's feature film work, television also kept him busy. His work can

be seen on many episodes of KOJAK, THE ROCKFORD FILES, COLOMBO, BATTLESTAR GALACTICA, MURDER SHE WROTE, MAGNUM P.I., AMAZING STORIES, MY NAME IS EARL and BEYOND BELIEF.

In 1975, he was commissioned by the United States Army to paint a portrait commemorating the Bicentennial of the Armed Forces. After completing his work, he was invited to the White House where he presented the painting to President Gerald Ford.

Shortly after, he was commissioned again by the United States Marine Corp to produce another painting which now hangs in the Pentagon.

Other commissions have been numerous and diverse ranging from murals for the Jules Stein Clinic at UCLA, sketches for the Jewish Federation "Holocaust

Monument" in Los Angeles, as well as designing and sculpting the award for a

Fellowship at the Hastings School of Law in San Francisco.

Other mural work can be seen at Ceasars Palace in Las Vegas, the Golden Nugget in Atlantic City and of course the immense fourty foot mural at San Diego's Sea World. Several billboards were also made for the master magician Lance Burton in Monte Carlo, Las Vegas.

His other creations also found their way into the homes of other Hollywood celebrities like Clint Eastwood, Billy Wilder, Barbara Streisand, Joan

In 1984, he received the ultimate honor bestowed on any artist in the film industry. He became a member of the Academy of Motion Picture Arts and Sciences in recognition of his prominent and extensive work.

the film industry as well as his own endevours.

Jerry's last works include designing a mural now hanging at the lobby of the Pacific Theatre in "The Americana" in Glendale, California in 2008, and a book cover for the Kindle version authored by his good friend, Colonel Ernest Frankel titled "Band of Brothers," in 2012.