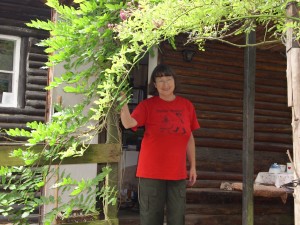 I am writing this short editorial a few days before the first of April because beginning with tomorrow I won’t have any time for writing. Easter is coming and it brings lots of work but also much joy. I am so happy that April is almost here. It is a wonderful month.

Everything seems to be waking up after that awful winter- so long and cold this year. There are snow drops, violets, primroses, there is golden rain. Also people are waking up( at least some.) I have a thousand plans what to do during April…

Even though I did a lot of traveling in my life I don’t know whether other countries consider April a month of playing jokes on others. I never asked and when I was in Texas I never came across any of the joking that we do in the Czech Republic.

The writer Alice Frostova wrote a little book called “Long Live April!”  In it she describes  how people in her family and her friends would “fool” one another. It is amusing reading and it also shows how people under communism tried to make their work hours more fun. If someone yelled ”Fire”, most workers ran out of their offices and interrupted their work. Or someone called:” Look, there is a white elephant on the bridge” and then followed it by a call: “ April Fools!”

Everybody was laughing: the perpetrators as well as those who were fooled. Alice’s book contains some very original ideas. ( We have it in our office.)

You could do this only on April 1.

I am writing about this custom to be able to say something positive in addition to those primroses and violets- I am looking forward to see those! The situation in our Republic is  rather unclear- to put it mildly. Several court decisions about financial crooks were made. Those people started their appeals immediately.. Others were found innocent. Today the Constitution Court dismissed the complaint against former president Klaus who had given amnesty to thousands of hoodlums-thieves, corrupters and other crooks. And the prison officer Vondruska- who used to beat prisoner- was sworn in as a member of the municipal council for the city of Liberec- as a member of the communist party. It is true that most of the members of other political parties besides the communists and the social democrats left the hall at that moment. But that is not enough!  This provocateur should be put in prison!  All I can say:” We have democracy, good politicians, just court decisions - April Fools!”