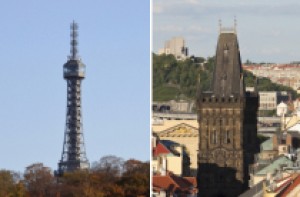 The MUSEUM of the CITY OF PRAGUE recently took over the administration of the Prague towers, namely the Petrin Observation Tower with its Mirror Labyrinth, the Old Town Tower, (Staromestska), The Lesser Quarter Bridge Tower,(Malostranska), The Powder Tower( Prasna brana), and the St. Nicholas Bell Tower(Svatomikukasska) These stone towers are to be restored and made more accessible to the general public. Detailed information can be found on www.prazskeveze.eu.

An exhibition about the project is now open in the basement of the Petrin Observarion Tower since March 6, 2013 and will be open until March 30, 2014. The exhibition also includes tower models made from MERKUR - set( like an ERECTOR SET) . Visitors to the exhibition will have a chance to build their own models with the Merkur sets . Their creations will be subsequently evaluated and the best ones will be included in the exhibition.