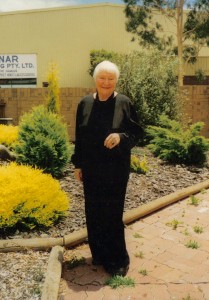 one of the great Czech dancers was born March 13, 1913 in Prague. As a small girl she danced  in various children’s ballets. She first studied in the ballet school of Jaroslav Hladik in Brno. At 15 years of age she was already a regular member of the Provincial Theater in Brno. Later she studied  for two years in Paris with Olga Preobazenska. Thereafter she returned to Brno where she was engaged as a solo ballerina at the same theater. She danced in several ballets by Bohuslav Martinu.  Her dancing partners were Emerich Gabzdyl and Ivo Vana-Psota.

She received especially great  reviews for creating the role of Julia in Prokofjev’s “Romeo and Julia” in 1938.

Another of her teachers was Rosi Chladek in Hellerau near Vienna, Austria, where she spent three years. Rosi  introduced her to modern expressive dance. She also got interested in studying folk dancing with Jarmila Kroschlova.

She continued her career in Brno for many years and later was engaged by the National Theater in Prague. In 1945  she became the vice-director of its ballet department. She also created many original choreographies.

In addition to all of her performances she also worked as a teacher of dance. In Prague she worked as a professor of folk dance, and also was engaged by the Prague Academy of   Arts. Her dancing partners in Prague were Oldrich Stodola and Sasa Machov.

Zora Semberova and Sasa Machov were really the most important dancers of the National Theater  in that era. She also worked with Alfred Radok, the founder of Laterna Magika.

In her later years she received an invitation to lecture and teach at  Flinders University in Adelaide, Australia. She received many medals, recognitions and awards on both continents.

She was loved and admired by her students. For examples Jiri Kilian dedicated his ballet Adriane to her.

In Adelaide Zora even founded the Australian Mime Theater. She also became for a short time the artistic director of the Nederland Danse Theater.  At her 80th birthday she received a Golden Plaque as a Honorary Member of the National Theater in Prague.

I had the honor to talk to an artist who could communicate clearly and truthfully. I felt that I had talked  not only to a great performer, but also to a beautiful human being who gave her life to communicate beauty, wisdom and love.