Celebrations of Czech Statehood will be Dedicated to Czechs Living Abroad 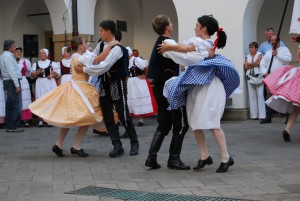 During the week of September 24 to September 30 a series of activities will take place in Prague- all part of the project:” CZECHS ABROAD-CELEBRATING CZECH STATEHOOD 2012” . The purpose of these happenings is to acquaint the public with life stories of Czechs living outside of the Czech Republic.

The program will open with a festive evening prepared by the National Museum and will take place at Vitkov. Three different folk groups will be featured. The civic organization called “Sedm paprsku” (Seven Rays) will present an International Folk Festival composed of Czech minority groups living abroad. All will also take part in the St. Wenceslas pilgrimage to Stara Boleslav and in the traditional costumed parade from the Toskan Palace to the Hradcany Square in Prague. This will be followed by a Conference of the International Coordination Board of Czechs Abroad entitled “Czechs Abroad and the Generational Problem.” In the Czech Senate a special prize “An Outstanding Czech Woman in the World” will be awarded. The Naprstek Museum will have special exhibits.

The Rumanian Cultural Institute will inform visitors about the Czechs living in Banat, Rumania. A meeting between important personalities (living at home and abroad) will take place on September 28 at the National Theater. Also a new publication, called “Vzkazy domu” (Messages Sent Home), will be presented. The book includes stories of thirty Czechs living abroad.

The whole celebration program is also intended to express appreciation to the Czechs abroad- for their propagation of Czech traditions, culture and awareness about the Czech nation. It will not only concern itself with those Czechs who left their homeland many years ago, but it will also inform about the many recognized specialists who work in various places in the world and who left after 1989. Many of them had dramatic experiences and attained great professional success. The project is coordinated by the Department of Foreign Affaires.