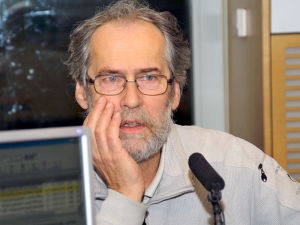 Right at the beginning I want to thank the journalist Ivan Hoffmann. We can hear him almost every Monday on Radio 2. He tells it like it is. His political commentaries are clear- cogent, fearless, yet humanly kind. You may find them on the internet. Reading them will make you feel good.

Today he spoke about why the minister of justice Pospisil was relieved of his office.. Well- we all know why- because he decided to rise above the political mess and decided- in his youthful enthusiasm (thank God for it)- to behave like a real man. He refused to sweep under the rug the various affaires of the politicians. And we all also know that the politicians are not concerned with the people’s well being, but with their own greediness and covetousness. I am disappointed in the Prime minister Necas who seemed to be a decent man at the beginning of his career. He is not that any more. He is being influenced by backstage manipulators –mafiosos- who have millions and billions in their pockets or in wine cartons… They probably are threatening him and he is presumably afraid- but if he were a real man, he would resign.

It is also true that the jailed hetman Rath is a rather short person and also a “small fish” measured by his various affaires. And the “big thievish fish” are trying to clear their way to even greater thievery. Minister Pospisil tried to change all that. Was it naïve? I think that it was a manly and bold act.

And therefore I am praising Ivan Hoffmann( I met him for the first time at a concert in June 1989 in Bratislava.) Joan Baez was the artist. She invited Vaclav Havel and Ivan Hoffmann to join her on the stage. It was actually a “velvet revolution” six months before the “real” one took place. The Stb ( the state police) disconnected all sound equipment at the concert. But Joan did not give up. She stood at the edge of the stage and sang and spoke without microphones. About six thousand people in the sports hall sang along with her including myself. ( I still have the recording of this event and value it very much.)

When I brought my report with beautiful photos of Ivan Prokop to my previous office, my then editor-in-chief was very enthusiastic at first. But after coming back from her regular Tuesday meeting with the communist big shots she returned my manuscript with the pictures and said:” Don’t ask any questions but hide it in your drawer.” I did so. After the above mentioned six months had passed I was approached by several women employees from the editorial office of Czech television( where I had worked and from where I had been fired because my name was read over Radio Free Europe in connection with my signature). They asked me for that article including the photos - would I give it to them or sell it - as a lead article. The article was then published on the first page including my remarks about how the Stb had disconnected the microphones. But that happened in November 1989- when everything was different and beautiful..( At least we had hoped so.)

The political situation in our beautiful country is not beautiful after twenty two years.

However, what is lovely is the Sokol slet that you are reading about- if you live far away. If you are near, come and take part in the various activities at many locations in Prague…

And I must repeat again: There are bad people in this world, but also many amazing ones ( like in Sokol or among the scouts). Both of the mentioned organizations were banned three times in the recent past- and both are celebrating their anniversaries this year. Luckily I meet more of the amazing people often…

I wish you all a great summer