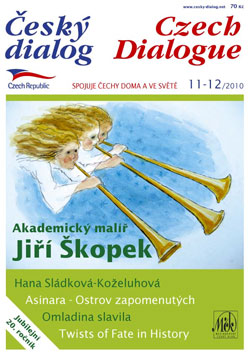 ...in Vienna, Austria recently celebrated its 125th anniversary of existence. It was and is a amateur theater club founded in 1885 in Vienna by the local Czechs and Moravians who wanted to have a Czech theater of their own. Supported by the educational association "Komensky", it provided wholesome entertainment for many people by staging historical plays, comedies and musicals for many years. At first the productions were held at the "Narodni dum" (National house) in the 15th district. Good relations were established with the National Theater in Prague so that some outstanding actors traveled from Prague to Vienna to participate in local productions - for example Jindrich Mosna in 1900-01 and Hana Kvapilova in 1902-04.

The first World War did not affect the club's activities very much, but WWII did. The organization was banned during the war and many members lost their lives. After the war their activities resumed but they had to find a new location, because Narodni dum was bombed and destroyed during the war. Eventually they found a permanent home in a building on Sebastian Platz.

Since 1989 the organization occasionally visits and performs in the Czech Republic, especially in Kromeriz. In 2006 they played even in Prague at the Estates Theater.

To celebrate the 125th anniversary, the "Omladina" staged the musical "My Fair Lady" on November 13. Many guests from the Czech Republic came to visit. The organization has been doing well for many years under the direction of its president Anna Vadurova.

Allow me a personal note: Being born in Vienna and living a short distance from the old "Narodni dum", my parents and I have attended most of the productions of "Vlastenecka omladina" in the years 1926-1938 and enjoyed them. I wish the organization lots of success in the future!