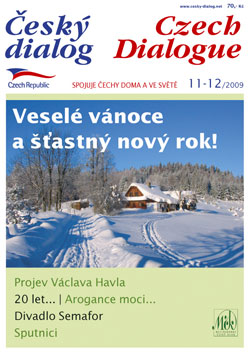 GRATIAS AGIT is a prize awarded by the Czech Foreign Ministry to persons living outside the Czech Republic who have made a notable contribution to Czech affairs (normally cultural). Most of the recipients are emigré Czechs but we are pleased to report that Geoff Piper has been awarded this prize in 2009. Only two persons from Luxembourg (one a Czech emigré) have been awarded it before.

Promoter and sponsor of Czech music Geoffrey Piper was born in Chelmsford in Great Britain. He studied German and French at Oxford. After fi nishing his studies, he worked for a short time as a teacher of languages in Great Britain, and then as a translator in Munich. On the basis of a selection process, he became an translator for European institutions, a position that brought him to Luxembourg, where he worked for over 30 years in the European Commission's translation centre.

Music has always been and continues to be an important part of his life. Mr Piper is an amateur musician - he plays the cello and piano, and is a member of an amateur symphony orchestra. In 1995, he participated in a project in which musicians from seven countries were invited to Luxembourg. One country chosen by Mr. Piper was the Czech Republic, a country he has remained fascinated with ever since. Today he has an exceptional overview of the current Czech music scene.

Nearly 15 years ago, Mr Piper founded the non-profit association Music Enterprise and began to invite Czech musicians to play concerts in Luxembourg. He co-fi nances recordings of Czech musicians and holds summer courses for amateur musicians in the Czech Republic with the participation of exclusively Czech teachers. To date, he has organised over 100 concerts. He represents a whole spectrum of quality musicians, such as Petr Jiříkovský, Jitka Čechová, the Kaprálová and Martinů Quartets, the Prague Chamber Orchestra and more. Music Enterprise has sponsored recordings by Czech Radio and ArcoDiva. Most recently, it initiated the formation of permanent musical ensembles consisting of Czech and Luxembourgish interpreters, the Bohemia Luxembourg Trio and the ALEA Trio; their recordings are available on CD.