>From the Speech at the Conference SVU at College Station 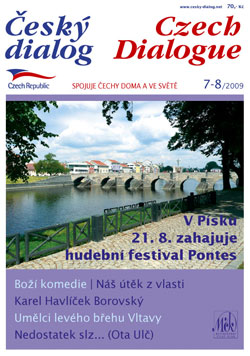 When I got in 1989 an idea to found this magazine I thought it is a divine idea.

When I started it and I became the own slave and working and working from early morning till midnight and every day got so many problems with every things about this work, I said: “It has to be a voice from the hell to choice such work.

First allow me to give you a little HISTORY.

Eighteen years ago- in the middle of a joyous euphoria- after the so-called Velvet revolution- we started to publish a new magazine called Czech Dialogue for Czechs at home and abroad. We were thinking of those Czechs who left their homeland under communism to start a new life in free and democratic countries. I assumed that a dialogue between those who left and those who stayed would be necessary and beneficial for both sides. For those abroad- to show that we were trying to do away with the artificial division that the communists built between the Czechoslovak citizens by regarding those who decided to live abroad as traitors of their nation. For those who stayed such an exchange would be very beneficial to learn how people live in truly democratic countries.

Many of our citizens left their homeland empty handed and had to start a new life under difficult conditions. They experienced various hardships, yet most of them became in time successful representatives in various fields. We – at home- also had to start anew after the Velvet revolution- and often in a different way- quite different from ways that we were used to. Thus we wanted to start a dialogue about all of the above- about what we have in common and about what was different. It appears that it was a good idea- the Czech Dialogue has been in existence for almost 16 years in spite of a lot of financial and other problems. Our first subscribers were members of the Czechoslovak Society of Arts and Sciences (mostly from the USA). Gradually people from other democratic countries of Europe and Australia became subscribers. Later, a related civic organization, called the International Czech Club, was created for our readers. This club unites its members from the whole world not only in writing and not only virtually, but in reality. It organizes cultural activities, discussions, lectures, mutual meetings, outings, etc. Its members are very interesting and outstanding people from all walks of life and from all corners from the globe.- university professors, artists, entrepreneurs, farmers, retirees, and students. What pleases us most- some members are also people who never left their homeland- yet they have a positive attitude to those who left and now are coming back to visit or to stay.

Trips Abroad, Experiences of My Compatriots, the English Language

Publishing an independent monthly magazine brings lots of joy, even though I often swear that “this number is definitely the last one, becouse a lot of work a lot of time which I miss fot many other things I would do.” To be in contact with good, educated, decent and successful people is wonderful. Those are the ones who read our magazine- the others generally do not. I had the opportunity to travel abroad both for shorter and longer trips and to visit my compatriots. This helped me to understand their experiences in different parts of the world.

I traveled in many European countries, and later in parts of Australia where I visited Czechs and Slovaks and where I spent about 3 months. “Our“ people in Australia who became also my friends- impressed me by their sunny dispositions in spite of the fact that they had to experience a hard life and possibly live through some bitter disappointments. Their energy most likely comes from the weather- they have 340 sunny days every year; also from the vastness of the land – 1 citizen per 1 kilometer (not as crowded as Europe) and from a peaceful and free continent which experienced democracy for more than 200 years - just like the USA.

After Australia I really needed to visit the US. My first visit was to Minnesota to take part in a conference of the Society of Arts and Sciences in 1999. I also visited New York, Chicago and other places. The trip opened my eyes to this very dynamic, great and unique country. At that time it was decided to include in the Czech Dialogue also articles in English for those who have a Czech “heart”, but no Czech schooling. Therefore our magazine now contains articles both in Czech and English. Since my trip to Minnesota I have visited the USA almost yearly and I met- in addition to recent exiles- also many Americans of Czech origin whose ancestors came to the US during the 19th century.

I found them to be a very interesting and friendly group of people who are quite proud of their ethnic background. They are glad to be able- after more than 40 years of communism- to visit their relatives in the old country; and the European Czechs are glad to have a chance to invite their American relatives to their homes without any political interference and to show them the sights and beauties of their homeland. All this is beneficial for both sides- good promotion of the Czech Republic abroad and widening possibilities for our young people to travel and study abroad. This does not mean that I wish to minimize similar praiseworthy efforts of our more recent refugees and exiles. Many of those who left Czechoslovakia in 1948 and later worked hard and without pay in many Czech organizations in the US and elsewhere. Many returned home after the Velvet Revolution to help build and to improve democracy in their homeland.

Czechs and Slovaks do Succeed in The World

The happiest part of the work with the Czech Dialogue is the realization that my countrymen are doing so well all over the world. They succeeded- after many initial difficulties- to adapt to new circumstances- to be successful as students and hard workers. And as they achieved excellence in many professions as scholars and artists – they helped to improve the image of their country of origin and contributed to world culture at the same time.

The Czech nation, located for centuries in the heart of Europe, is small as to the size of its population, yet it has always enriched the world by its interesting history and culture. Just to mention a few famous persons- one of the first exiles Jan Amos Komensky (Comenius), composers Antonin Dvorak, Bohuslav Martinu, Leos Janacek, soprano Emma Destin, writer Karel Capek, film director Milos Forman, etc.…

Allow me to quote from a letter from Marie Dolanska who is one of the volunteer translators of our magazine.

“It is not sufficient to just mention the famous Czechs. There are many thousands Czechs and Slovaks living abroad and every one of them has made friends and acquaintances who most likely learned from him a lot about his country of origin. Many Americans, Canadians, etc. may admire Dvorak or Forman from afar, but they never had a chance to meet them personally. But if they get to know a Mr. Novak or Mr. Novotny, they see them daily at work, or have a glass of beer together and possibly become friends. And if the Czech newcomer is a good, honest and hard working guyhe promotes his country of origin just as much as any of the “famous” ones.

We- the newcomers- must always remember that each of us is in a sense an “ambassador” of his country”...