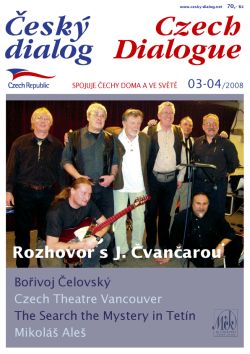 On November 22nd 23rd and 24th 2007, Vancouver's (British Columbia, Canada) Czech Divadlo Za rohem (DZR - Theatre Around the Corner)celebrated the 30th Anniversary of its first performance by a second staging of the comedy "Heavens on Earth" by Voskovec, Werich and Jezek. In its 30-year-long history DZR staged well over 50 plays; over 150 individual performances; produced many guest performances by leading Czech artists and prepared many evenings of music and poetry. To mark such an important occasion, DZR has, for the first time ever, re-staged one of its most successful shows after 13 years. It was directed again by Dr. Josef Skala, co-founder of the DZR, in which he directed and produced over 25 shows, in many of which he also performed the principal parts. This anniversary show was again a great success and had proven, even to the expert reviewers, that the standard of its productions can easily be compared with that of fully professional theatres in Prague. PhDr. O. Opatrna reviews the staging and gives a few questions to Dr. Skala (a physician and professor of pediatrics in his other life).