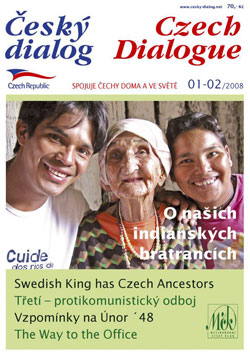 On December 8, a very unique meeting took place at the National Museum in Prague. Several organizations, including the Bedrich Smetana Society, invited Dr. Jan Trojan from the Janacek Music Academy in Brno and Mr. Zdenek Smiricky to lecture about the almost forgotten Moravian composer Josef Schreier (1718 - ?).

A very short example of Schreiers work was presented by the soprano Marcela Hofmanova and accompanist Zuzana Outratova.

After the recital we learned many details about J. Schreier from Dr. Trojan who did extensive research on his life and work. J. Schreier was born in Drevohostice near Prerov. He worked in Bilovice near Uherske Hradiste as a teacher and cantor for many years. He composed both secular and church music.

We were very surprised to learn that some fragments of his music had been found at various locations throughout Moravia and even in Slovakia and that they are being prepared for public performances. The high point of Dr. Trojan’s research was the discovery of Schreier’s greatest work, namely his Christmas Mass entitled "MISSA PASTORALIS in C BOHEMICA."

As it often happens, this Mass was forgotten with time; only the Christmas Mass by Jakub Jan Ryba became popular and it is still being performed often and everywhere. Since its discovery, the Missa Pastoralis was performed several times in the Czech Republic, and even in Vienna, Austria. Unfortunately this beautiful composition is not yet available in music stores.

However, one can purchase a biography by Jan Trojan, entitled "Josef Schreier (1718- ?)", published by VOTOBIA 2005 (e-mail: votobia@telecom.cz).